This article is about a real case in my project to deliver a real-time feature, which relies on distributed messaging between service boundaries. Instead of a pure technical literature on choice of tools or coding approaches, or the principles we've heard a lot behind designing microservices' communication, I'd like to beam the spotlight to the juxtaposition of them and how they matter in implementing a robust, easy-to-maintain messaging. Especially, the importance of revealing business logics in the process.

The core function of system might sound distant to most of the readers, it's to show the clocking of employees in the client when they arrived and left the work. As the modern version, there are so-called biometric clocking machine to identify employees by fingerprints or eyeballs. The feature to deliver at the moment is to collect those clocking events and provide a UI to display the clock-in and clock-out time, along with inferred worked hours among other stats following a set of rules.

The clocking data collected by the machine are stored in a separate system whose interface is a Microsoft SQL Server database view. The system we are building is aiming for a microservice architecture, which is continuously deployed through pipeline. 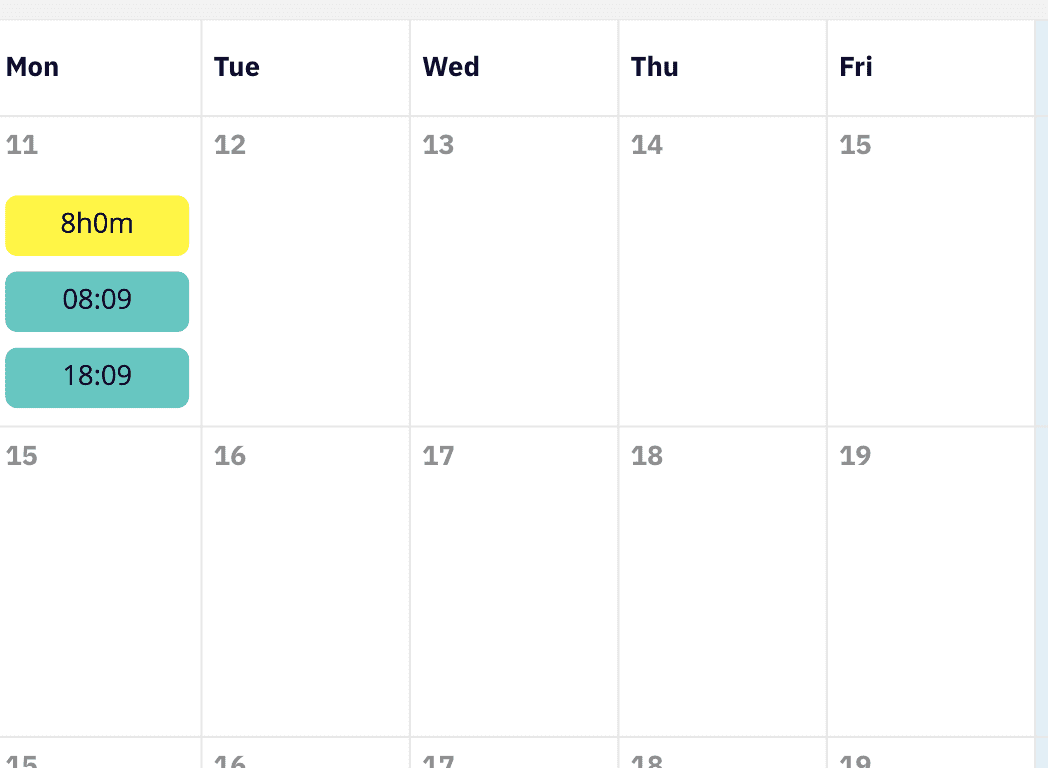 Without much hesitation, we started with a distributed messaging approach to minimise the coupling between the systems. Since the Clocking system doesn't provide messaging capability out of the box, we build a separately deployed Adapter to fetch the data from the Clocking database and send the message. The payload is simple that only contains the identifier of the employee and a timestamp of when the clocking happens.

Under the flag of no state, so to start with the simplest design, the adapter is a 5-min interval cron job to load clocking happened in the past 5 minutes. To avoid concurrency issue, we only deploy one instance of this service.

Question time, what issues do you spot from this design?

Timesheet only cares about the earliest and latest clocking of the day, so it makes no sense to keep all the history. For a second we thought of event sourcing within the service, yet it's going to only be a clone of the data it doesn't own, which might be a bad idea. Then we came up with below algorithm.

And yes, we have two instances of this service.

After some thorough testing in QA environment with fabricated clocking data, because the Clocking 'conveniently' doesn't have a testing environment, we released them. Almost straight away, we noticed some wierd things happening to some employees

The troubleshooting wasn't a pleasant journey at all. Digging logs, adding debugging info, scratching head, we've all been thorough this somewhere in the career.

Clock-in or out time was missing

The triggering of cron job occurs with certain degree of deviance, which we had expected before release. The solution was to add a few extra seconds to the query to get the data. So the interval of cron job is 5 minutes, but we request for data happened in the past 5 minutes and 15 seconds. The potential duplicated messages would result in an entry with same clock-in and clock-out time at certain time of the day, which would be corrected by later clock-out.

The good intention was screwed due to a bug in coding, instead of extra 15 seconds we had 15 seconds less, which explained the missing messages. The answer was not interesting by itself, yet it highlighted the difficulty to test the service with confidence, even we've followed TDD most of the time. An acceptance test for a cron job won't be cost-efficient to run and maintain, so there was none.

Clock-in or out time was incorrect

We understood the timesheet service was not thread safe if two instances are handling messages for the same employee at the same time. Considering it shouldn't happen a lot, we kinda played it down.

It turned out that one of the machine wasn't that sensitive to fingerprints, or some employees simply didn't trust the beep from it. The result was that in the 5 minutes window, one employee might have more than one clocking message, which were processed by two timesheet instances at the same time. Due to the race condition, the consequence were too mysterious for human brain, and to be reliably automated tested.

I reproduced the issue out of luck with bombarding local installation with messages. Yet it's not a deterministic test fit for pipeline execution.

It's mostly caused by the same reason of previous one.

Recap on the issues of first iteration

There could be some shortcuts to solve the issues, but all come with caveats:

To sum up, we've concluded the inherited flaw of first iteration

Or put it in another way, to ensure the system behave as expected, the hidden contracts are

Some of them are met, some of them is simply impossible. Though the implementation looks simple, in fact distributed messaging solution is not simple by nature. The costly hidden contracts comes with it from the very beginning .

First breakthrough, we set up the adapter in QA environment, loading data from production clocking system. It's not always possible in all circumstances, mostly due to security concerns. That's why it wasn't our first option. However, if the inputs to a system are unconditioned human behaviours, in this case not framed by system's own UI, a real time production data alike verification is a blessing.

After the changes, a review of the hidden contracts in first iteration explains where we are

In a hindsight, this was the time of diminishing return. If the client accept an at most 5 minutes' error, the third contract won't exist. Nevertheless, it would be awkward to explain why. Thanks to the changes on adapter, the last contract would almost be met as long as we never had to replay messages from the past.

Anyway, we kept moving on. The next stride was to make the service idempotent, which later proved to be indispensable in our messaging model. Until very recently have I realised, the pattern that the series of clocking events being squeezed into two fields, is a map-reduce. A quick search would explain why idempotency is necessary.

What I'd like to cover here, is how idempotency is achieved in this case. This is highly business relevant that the solution would be different for various problems.